﻿﻿﻿﻿﻿﻿﻿﻿﻿﻿﻿﻿﻿
When I first met Amish youth in New York, I  was buying fudge or other baked good at a roadside stand. At first the thought I better have the right change because they didn’t have calculators, and some were quite young, maybe nine. Well, I didn’t have correct change, so I apologized, but no sooner had I said, “….I’m sorry,” when they whipped out the right change. I just gawked at asked, “How did you do that?” It wasn’t like I bought something for $10.00 and gave them $20.00. It

was much harder.  One boy pointed to his head and said, “I did it all up here.”


Most Amish children learn mental math, doing figures in their head without paper. This is the way it’s always been done for hundreds of years.  They also only focus on the three “R’s”: reading, writing and arithmetic, so they’re very good at them.  These are the building blocks that foster life-long learning, something I’ve observed about the Amish; they love to learn new things.
Just like the Amish didn’t adapt to the industrial revolution, neither did they adopt the public school system.  They believe in local schoolhouses where their children can walk to school, or it’s a short ride. They only go to the 8th grade, and then go on to learn life-skills. For women, it means preparing to be a wife and learning many artisan skills so they can have some kind of shop to supplement the household income. These shops range from bakeries, dry goods stores, quilt shops, craft shops, greenhouses…the sky’s the limit. Amish young men go on to an apprenticeship to learn a trade, such as blacksmithing, farming, making clocks or furniture. Once again, it’s as varied as the human imagination.


Many are surprised and some appalled that they only go to 8th grade. When they find out they go to one-room schoolhouses, their views seem to shift. They think of Laura Ingalls Wilder or Anne of Green Gables.  The nostalgia usually wins out and so there is little criticism.


I homeschooled my four kids using the one-room schoolhouse method (we even used Pathway Amish readers) and I believe it’s the best method. Children aren’t confined to one grade. They may be in 3rd grade math, but 5th grade reading. I also liked combining classes, just like they did long ago. We studied history together and went on field trips, learning the same things; my older ones helped the younger. I can’t say we were always as bonded as the Ingalls…oh, we had our days…but they’re all very close today.   ﻿
﻿
The Amish hope that close friendships formed in one-room schoolhouses will last for life. My friend Lydia still writes to a friend she had in 2nd grade, even though they haven’t seen each other in over 30 years. When I asked her why, she said, “We were school friends”.  Other Amish call their school friends their “gang” or “buddy gang”, and I always think of my neighborhood “gang” when hearing this.
The biggest surprise may not be that the Amish go to the 8th grade in one-room schoolhouses, but that they rate equal to or higher than public school students. Steve Berezney wrote an amazing article on this wonder. It’s entitled The Suprising Phenomenon of Amish Schooling. If you Google this title, it will come up. He states that the Amish have a saying on what makes a happy school. The Answer: Study, Cooperation, Honesty, Order, Obedience, Love-SCHOOL. I believe they’re on to something…. 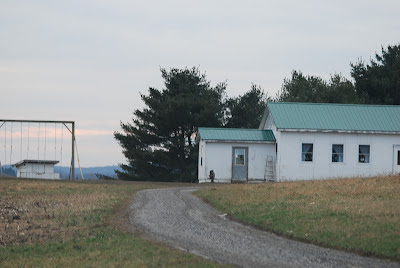 Amish Dolls Made in China?

Sorry I haven’t blogged in a while. Very busy getting a new novel written and out to my publisher. Most of the time I’m inspired to write, but this time, I want to get up on my soap box and yell from a bullhorn.
A conversation on Amish Literature Fans on Facebook was very disturbing. One member said she bought an Amish doll and was surprised when she took it home to find that it had a label on it, “Made in China”. Well, I was shocked, but then other members got their dolls out and found the same thing. MADE IN CHINA!
I was upset enough to do further research. Many shops in Amish tourist areas aren’t buying authentic Amish dolls from the locals, but from, well, China. Please feel free to leave a comment disagreeing with me, but I feel this is deceitful. I mean, you go off to an Amish settlement and buy a doll and I would think an Amish person made it. You are in Amish country, not the mall.
I know many shops carry local Amish crafts, so you can’t lump them all together. But I got to thinking.  What if everyone asked where the Amish doll was made before purchasing  it? This would help the Amish tremendously. Many Amish women make dolls in their homes and sell them in little craft shops, usually in a separate building by their house. If you go to an Amish settlement, why not follow the white hand painted signs to a craft or quilt shop. Not only will you get to meet some nice Amish folks, but you’ll know where it came from. The qualities of the dolls are also much better.
My Amish friend Emma has a quilt shop. She has customers from around the globe. People want to meet a real Amish person and buy something they’ve made. Can we be like that in America? When we shop for Amish dolls, can we ask if it’s made in the USA, by an Amish person?

I just finished watching The Amish, the new PBS documentary on the Amish. I thought it was very balanced and showed the other side of Amish life we don’t like to talk about; dysfunctional families, especially spousal abuse.
People ask me who Ruth and Luke are in Amish Knitting Circle. Well, they’re a real Amish couple.  We met “Luke” when an Amish friend decided to sell us fifteen acres of his land in Western PA. He moved to Marathon, NY and wanted us to have his land and not Luke.  Our friend called Luke a bad apple. “You can always find a bad apple in every bushel,” he said.
Well, Luke found out that our friend was selling us his land cheaper than to him, and thought he was in error, preferring us Englishers too much. So there was a big dinner to reconcile differences, but Luke still didn’t see eye to eye with church leadership.
But all this happened for the good. It brought attention to Luke’s wife and seven children. We told the Amish that the children all had rotted teeth and looked hungry. The house was in shambles and asked if they thought this was normal. Luke’s wife looked afraid of him…a lot. I told them I was afraid of him too because he swore at me when we went to look at the property.
So, there were more meetings, and Luke had to apologize to me. After he did, he asked if we wanted to buy his farm that bordered our land. He said he needed to move next to his wife’s parents because she wasn’t happy.  I was so glad to hear this, and he genuinely seemed to want to change. We didn’t want his farm, but told him we’d look for others who might.
I know many Amish in Western PA and NY and they read Amish fiction and are very excited about my books based in their areas. As they read Amish Knitting Circle, I hope they see that the church district Luke is in dealt with him in the right way.  They didn’t sweep spousal abuse and neglect of his children under the rug.  They’re also not opposed to having professional counseling, if needed. And I'm happy to say that "Ruth", Luke's wife, looks so much happier today.
The Amish are a Christian sect, but not so narrow minded as to ask outsiders questions. An Amish friend asked me out of the blue one day, “Why do you think married couples loose love for each other?” I was shocked and asked if she and John were having marital problems. She beamed. “No, I don’t deserve such a gut man. He’s so gut to me.” She must have had someone else on her mind. I told her that Christ loved the church enough to die for it, and a Christian husband is to love his wife in the same way. She nodded and agreed. I also said I believed there were three in a marriage, husband, wife and God. She nodded in agreement again, as if this was a common belief among her church district.
I felt I had to write this blog today after watching The Amish. I'm glad they made it believable and not like something off of Little House on the Prairie. God cares for wounded sparrows, like the Bible says, so how much more a wounded wife or child? 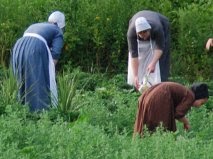