Do the Amish have refrigerators? Do they still use iceboxes?

Before I became acquainted with many Amish, I always wondered how they kept their food cold. Somehow I looked at them as campers, having big coolers or something similar. Maybe they had underground storage places, like root cellars. Well, many have root cellars but many still use iceboxes. Yes, as in an insulated unit where a block of ice is placed to cool the food.
It wasn’t that long ago that many people in America used them, my grandparents for one. My mom told me a story of how a salesman came to their house, most likely in the 30’s or 40’s, trying to sell my grandparents a new contraption called a refrigerator.  And they could be bought by paying in monthly installments. My grandparents declined, saying they had a perfectly good icebox already paid for. To buy something on credit was unheard of in those days, or maybe among Italians. They kept their icebox until it needed replaced, and then paid cash for a new refrigerator.


The Amish are similar to their way of thinking. If it works, keep using it. If not, consider other alternatives. The Amish I met in Lancaster County could not believe that my Amish friends in Smicksburg still cut ice, had ice houses to store the ice, and used iceboxes instead of refrigerators. Now, since there are so many types of Amish in Lancaster, I’m not saying there are none that don’t still use iceboxes. But the ones that I talked to laughed and said that my friends were “backwards Amish” compared to how modern they were.
So, I took my camera up to Smicksburg and asked Amish friends if I could take pictures of their icehouses and asked them why they still use iceboxes. “We like to cut ice,” was the men’s response.  They have shallow ponds where they cut ice with saws and it’s their annual ‘man frolic’, and something they cherish. This took me back. I’ve seen a dozen men on ice cutting it in frigid weather, and it doesn’t look like fun, but hard work.  But this is the Amish way of thinking: work and play are combined. And how they sing and laugh while doing it.


Of course, I wondered what the women thought of using iceboxes. They said, tongue in cheek, as long as the men carried in the huge ice blocks, it worked just like a refrigerator. And some were attached to their iceboxes in a nostalgic way. Now, their ordnung has changed since the Marcellus Shale is under W. PA and many Amish hire companies to drill for natural gas. So, some have natural gas powered refrigerators. The goal of Amish life is to live off the grid, and as long as there are no bills to pay, they're fine with it. They also use wind power, which makes it so picturesque to see windmills dotted all over the countryside. 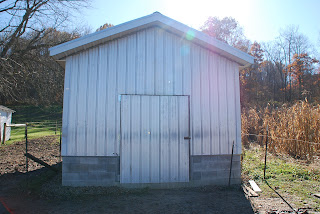 All the icehouses are white to reflect heat.
They also match Amish homes, almost all being sided in white. 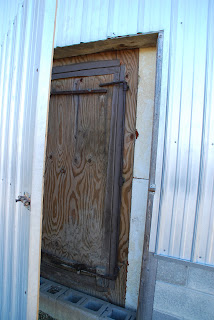 There are two well insulated doors on an icehouse.
They keep two years worth of ice just in case there's a mild winter. 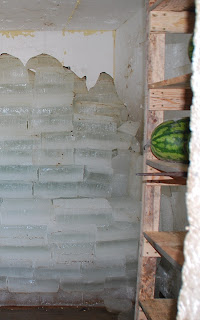 Shelves are placed inside so it doubles as a freezer.
Why there's a watermellon in this one, I didn't ask. 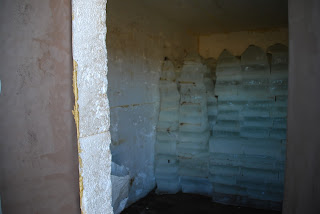 Notice the insulation. It's about a foot thick! 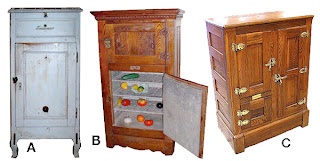 These pictures of iceboxes are not mine, but from Wiki Commons.
I've seen many styles of iceboxes in Amish homes, but the one on the right is the most common.
A cube of ice is put on the bottom left door.
Posted by Karen Anna Vogel at 10:37 AM 8 comments: