Do the Amish treat their horses like family? Breaking the myth that the Amish are backwards...

It appears that many didn't believe Adair's story about how the Amish united to help a family treat their horse better. Well, it's not surprising, as our culture has little community. That's what the post really portrayed, the Amish community coming together to help out a member financially and to correct/educate their views on animal care.

One person said that Mary Miller was the only Amish woman who cared for horses? Really? This stereotyping of the Amish really isn't fair. Let me tell you about Joe and his horse.

My daughter, Karamarie, and I visited quite a few Amish in Smicksburg a month back. We stopped in to see Joe, a young man of 25 who has a three kinner (kids). He's just a gentle soul, plain and simple. We've been doing business with Joe (construction) and we had a business idea for him. It would allow him to work from home.

"I'd really feel better being home," he said. "I don't like leaving my wife and kids...and horses alone all day...."

Horses? In the same sentence as wife and children? Really? I probed, as usual.

He went on to say that his favorite horse got loose when he was at work miles away. His Amish neighbors tried to lasso the horse, but it stepped into a rut somehow, breaking its leg. "I've never had a horse like that one, and if I was home, it wouldn't have happened," Joe said.

I was going to ask him things how would have been different if he was home, and then thought of when he and Noah (who I call my Amish son) lassoed my neighbor's horse when it got loose. Noah got a rope, swung it in a circle which then gracefully fell over the horses' neck. He was like Michael Landon on Ponderosa,  and my daughter, a teen at the time, blurted out, "Amish men are real men!" (I used her crush on Noah in my book, Knit Together)

So, if Joe has a home business, he would have lassoed his horse, keeping it from harm. In Western Pennsylvania, we have many of ruts in the ground, due to a long freezing and thawing season, expanding the ground. So a horse let out on uncharted territory can be dangerous.

But Joe's love for horses probably started as a little child. The Amish I know breed miniature horses, and they ride them in pony carts. (I want one for my granddaughter) All the talk about how backwards the Amish are, fueled by some new “reality” shows about them, really makes me sad. I can’t say it any plainer. I also hear it locally, too. People who know I write about the Amish just have to tell me a story…one that bashes them. “Do you know how deprived ONE Amish teen feels?” Well, that’s one person, and one person doesn’t represent a complete culture, because I know many Amish teens who thank the dear Lord above they're Amish.


(I will now get off my soapbox) 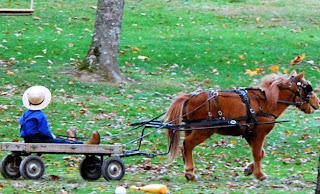 A little Amish boy in Smicksburg riding his pony cart.
Posted by Karen Anna Vogel at 8:56 AM 1 comment:

What happens when Amish horses are abused?

Mary Miller, my Amish neighbor and I had been talking about Christmas. It was a tough year for her. She and her family had not been having a good year. Medical bills were eating up any spare dollar they had. Mary, in her best planning mode was making lists of items she would like to give her children and husband for Christmas. Knowing that she would need to pay a driver to take her to the local shopping mall, I invited her to come with my friend Shelly and me to shop at a larger discount mall in the city. I was sure she could find her items at better prices.
Shelly, an herbalist, grooming teacher and pet trainer, was home visiting from Florida and I was sure she would enjoy finally meeting Mary. Mary was interested in the use of herbs and welcomed the opportunity to meet Shelly. Each of the women had heard my stories about the other for years.

We had a surprise snow storm overnight but decided to head out anyway. We arrive at the mall to sunshine and melting snow. At the mall we decided to each go our own way and to meet back at the entrance at 3:00 p.m.

Mary enjoyed the freedom of browsing from, store-to-store and really price shopping. I gave her spare key to the car so she could unload if she had to.

When we entered the mall, Mary asked, "Where are the rest rooms?"

Shelly and I replied in unison, "Right beside the fitting rooms".

On the way home Mary said there was only one thing on her list that she could not afford. It was a book by Monty Roberts. All the Amish were talking about this man and how he trained his horses. I told her I could look for it on Amazon, the internet distributor of new and used books at reduced prices. Mary gave me the title.

The author was an easy find however the title was his latest release and was still listed at full price. I noticed the next book selection by the same author entitled “Horse Sense for People,” was only five dollars. I called Mary and told her what I had found. She could not afford the newest release. She chose to buy the five dollar book knowing her husband Joe would enjoy any horse book, and considered it a lucky find.

I took the book to Mary as soon as it arrived. I knew she was a fast reader. I felt she would have it read before it was wrapped. And I was right.

Several days later Mary called and asked me to come over so she could tell me about Monty Roberts. She and I talked about books all the time but I never heard such excitement in her voice.

I went right over.

When I walked in the sliding door, she motioned for me to come into the dining room. She picked up the book with both hands and held it up for me to see saying, "Adair, this is one of the best book's I have ever read. This book teaches us that animals are God’s gift to man. They have feelings and will respond to love much quicker than a whip. This book is the best five dollars I ever spent."

I was surprised and suddenly aware of the profound effect words could have and how the words of Monty Roberts were already influencing Mary.

As an animal activist I saw in action what I had known, awareness is the key to improving conditions for animals. If this book so strongly affected Mary, I knew it would be a great Christmas gift for Joe.

Not only was the book appreciated by the Millers but the principles it espoused were put to a test a few weeks after Christmas when Mary and Joe hosted church for the community. In the midst of a blizzard, when most of the community events were closed or postponed, I heard the rattle of carts passing my home. The clap, clap sound of horses hooves on the pavement were muffled by the snow.

On Monday I was even more surprised when I saw a "new" horse at Mary's. I was on my way home from town and had to back up to make sure I was seeing correctly. I wondered why the Miller's would buy a sickly horse. Their horses were always well kept an d healthy. I stopped and went to the house and ask Mary about the new horse.

Well, it was the horse of one of the families who came to church. When I saw him I knew he was not being fed well. I was shocked that they had a horse in such a condition and that they brought it out in the storm.

But I knew one thing, Adair," Mary continued. "That horse was not leaving this property until it was healthy. We loaned them one of our horses to get home. And, now we are aware the family may need help."

I knew Mary’s family would care for the horse and when it was healthy return it to the owner. And, I knew their community would pull together to support the family that was in need.

Helping a friend lead to one bargain priced book, given as a Christmas present, that was already making a difference in Mary’s community. 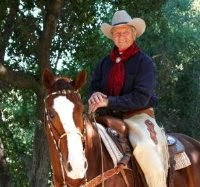 Posted by Karen Anna Vogel at 9:56 AM No comments: