It's a great honor to have Sarah Price on my blog today. Not only is she a great friend...but one of my favorite authors. You can tell that she deeply loves the Amish and respects their culture in her many books. Here's what Sarah has to say about why she writes Amish fiction.

The first time I was invited to an Amish canning party, I was twenty years old. Nearly twenty-five years later, I still feel the same rush of awe when I’m invited to attend birthday parties, celebrations, or work parties with my Amish friends. Each moment that I spend among the Amish opens my eyes to the spiritual goodness of their culture.Â I am blessed to have this unique relationship with the Amish. And this is something that I can share with my readers in the hopes of introducing a sense of Amish peace and tranquility that is too often lacking in our own lives.
The Amish move slowly throughout the day. They are not rushed or burdened with activities, work, or abundant commitments. There is no competition among the Amish, no petty grievances or jealous rages. Instead, they focus on the beauty of three yellow finches that visit the birdfeeder every evening, the bluebirds that nest in the birdhouse across the street on a telephone pole, or the growth of their crops. The Amish focus on the small victories of living each day and sharing that joy with their loved ones.
When I visit my Amish friends, I observe everything with a writer’s eye. I see the colors of the dresses hanging from the clothing line, the different shades of green in the growing cornfields, and the unspoken pride they take in planting spring flowerbeds and vegetable gardens. When a member of the community is sick, neighbors from both near and afar come to help that person’s family with chores, both inside and outside of the home.
The sense of spiritual well-being is so overwhelming. It leaves me breathless and humbled. During times of crisis, such as something as tragic as the Nickel Mines School shootings from 2006 or the less severe current rash of vandalism that has recently been spreading through my Amish friends’ community, the Amish demonstrate a true sense of Christian love for each other. Never is there talk of retribution or retaliation. Such a thought wouldn’t even cross their minds. Instead, they demonstrate the power of being a true believer in Jesus Christ. They work hard, they worship true, and they live life, the life that God has given to them, not the one that they wish they had.
Perhaps that’s the secret, the Amish peace: hard work, true worship and a life that is lived to the fullest. I’s the secret that I hope to capture and share in my books.

Visit Sarah at http://sarahpriceauthor.com
or on Facebook at www.facebook.com/#!/FansOfSarahPrice
Posted by Karen Anna Vogel at 8:18 AM 4 comments:

Do Amish youth work too hard?

It never ceases to amaze me how the Amish treat their young teens like grown-ups. It reminds me of other cultures where boys are considered men at the age of 13. Some of you may chuckle at that, thinking of an immature middle school teen right now. But is the immaturity of some teens the American culture’s fault?

﻿﻿﻿﻿
My dad left his home at 15 to join the CC Camps during the Great Depression to send money home to his mother and other siblings. When I see pictures of him in New Mexico building roads, he looks like a man. When I visit Amish settlements scattered across Western Pennsylvania, I see young teens driving huge hay wagons on main roads. I know a few of them aren’t even teenagers, being 12.  Their self-worth is so much higher than English youth, it sometimes takes me back. If parents aren't home when visiting a family business, a young son or daughter will come out and explain the business and clinch a sale. It amazes me.
One Amish family I know, depends on the income of their oldest daughter, who’s the local schoolteacher at 16. The whole family of 12 works at the vegetable stand, greenhouse, make crafts, just about anything to pitch in. When I see this young teacher, I think of my mom.  She did the same thing as a youth. She too lived through the Depression, and handed her paycheck over to the family when she got her first job as a shoe clerk. She told us about that job with such pride; she was a part of something bigger, a family. My grandma was a seamstress, and my mom did embroidery or other fabric arts to embellish dresses. I see this all the time in Amish country; mothers and daughters working on something to sell, whether a craft or jam.


I got my certification as a Montessori preschool teacher, and the approach to training children is similar to the Amish. As soon as a child can do something for themselves, or for the group, they’re required to do it. So, if a child can push a broom, they can sweep. It’s almost comical to see little three year olds with their pint-sized brooms clean-up after an activity. Cleanup is a part of the program. But I see this in Amish families all the time.


Getting back to teenagers, I really believe that as soon as they’re able to work, or contribute, it makes them feel needed and important, and less self-centered. When I see rebellion in a teenager, I wonder if he/she doesn't feel needed. Everyone wants to feel like a part of something bigger than them, whether it's a family, a church, a Girl Scout troop.
Since I have a world-wide audience to this blog, I wonder if some of you can let me know if teenagers are coddled in your country or made useful when age appropriate. Thank you!

Do the Amish vote in presidential elections?

A few years, people met at my place to carpool to a Tea Party Rally. I had several Amish men on my back porch taking a break from building our barn, so I asked them another one of my 1001 questions. “Do you vote?”
Noah, the Amish man that I talk about often, took the lead. “If we need to.”


“Huh? If you need to?” I asked. “You always need to.”
Noah went on to explain that they’re well aware of political views that directly affect them, and will vote in those elections. But they want very little to do with the government.


For some reason, my son-in-law asked about the Bush Stimulus checks they’d received. Did it benefit them? Noah made us all faint when he said he refused to cash it, and so did everyone he knew who was Amish. He said, “If we take from the government, we’re tied to it.” They don’t want to be.
The Economic Stimulus Act of 2008 gave married couples approximately $600.00, AND $300.00 per child. The Amish have large families, and some could have made out quite nicely. Of course, I pushed the envelope again, emphasizing how much they missed out on. Noah said, “We don’t need the government. We take care of our own.”


What a role model the Amish are! Families take care of each other. The church meets the needs in their congregation. Friends pull together to make work light.
A new fiction book will come out in October that makes us wonder what this country would be like if we had an Amish president. "Not a career politician, but someone with a little old-fashioned common sense, someone who's not afraid of rolling up his sleeves and getting his hands dirty."
Old-fashion common sense to me means taking care of family and friends, not expecting the government to...not wanting the government to. I think  someone like the fictional Josiah Stoltzfus needs to president. 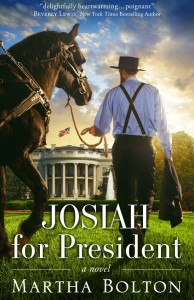