Journey towards a peace-filled Christmas 2013

I woke up this morning, my mind bombarded in rapid succession by my “to do” list. You know, that list of things that just have to be done before Christmas Day.


·         BLOG!
When my mind races like this, usually going into overdrive around Mid-December, I remember being in the hospital with pneumonia two years ago…right smack dab in the middle of December. My doctor chided me that I was too run-down. Moi, yours truly, who preaches in her books about Amish simplicity? Jah, me.

I also remember what I did two years ago…I slowed down and had a more Amish-like Christmas. I remember Lydia, my Amish friend, telling me the reason for the season is “just getting together and having fun”. I didn’t get it at first, but then I did. You can read about it here.

The Amish don’t try to fit in everything in one day, too, having December 26th as Second Christmas. Then, January 6th, Old Christmas, is a fasting day for reflection. Sometimes they celebrate Christmas in February. Lydia and her husband couldn’t celebrate Christmas until February because they can’t go to Montana on the Big Day, December 25th.

I think I need more reflection today, look back at former blog posts when I took having a peace-filled Christmas to heart. It’s in my head at present, but getting it 18 inches lower is hard.

Do Amish children make good workers? A heartwarming story by Adair, a woman who has Amish neighbors.

Here's another post by Adair Magee, a woman from Western Pennsylvania who has Amish next-door neighbors. I find her stories very heartwarming.

"Brad, my son, was coming to visit. He had been working in New York and was taking a short vacation. I knew he would help me with my spring yard work, which was a big chore. I hated to have him spend his whole week off working in my yard. If we had help, it wouldn’t take more than a day and Brad could have time to relax and visit instead of working the whole week. I asked my Amish neighbor if her children could come and help. I enjoyed their company and felt Brad would too.


On Monday morning the Miller children arrived early and were ready to work. I introduced the workers to Brad. I sensed a bit of skepticism in Brad’s raised eyebrows as I introduced Susan, 14, Jonas 12, and Jeremiah 10, as his work crew for the day. Each one stepped forward and shook Brad’s hand as I said their name. Brad took it in stride and handed Susan a shovel and began giving her instructions on how to dig a post hole.


“Seriously Brad, it is not as though I’ve not dug a hole before,” Susan remarked with a smile.


Ten minute later, as it often happens when you use old tools, two of the shovel handles broke.


“Not to worry,” Susan said. “We have lots of shovels at the farm. If you drive us there we can get them.”


The boys and Susan got in the car and we drove to the Miller’s farm.


As we pulled into the driveway, Jonas began speaking frantically in Dutch. Both boys leaned forwarded and were frantically pointing.


“Chief is loose,” Susan said so I could understand why the boys were so excited. Then she ordered, “Adair, drive us to the back of the barn NOW!”


I stepped on the accelerator and pulled through the field to the back side of the barn.


“Chief is outside the fence. We need to shoo him back through the gate. I need to give you directions.” Susan continued in a rapid commanding tone.


I stopped and the boys jumped out of the car and ran to open a gate to the fenced in area. Susan led me over to the fence and told me to stand perpendicular to the opening with my arms outstretched as far as I could.


“Just stay right here and trust me, Adair,” she said as she and the boys took off running to the field beyond where Chief was contentedly grazing.


I stood where she told me with my arms outstretched and watched as Chief, a huge paint stallion with a black mane and tail, became aware of the children heading toward him. He lifted up his head, snorted and began running full speed in my direction. The boys were prompting the horse with commands in Dutch and Elizabeth was shouting to me, encouraging me to stand firm, stand still.”


My heart was beating fast and my mind was racing as Chief came barreling toward me. I wondered if they really knew what they were doing. I heard the sound of Chief’s heavy breathing and his hoofs rapidly hitting the ground as he was getting closer and closer to me. When he was just a few yards from me he turned and went in through the opening in the fence. I swear I felt the tips of his mane and tail brush my face as he passed by me. I was impressed by the way the children had handled getting Chief back into his pasture. They did it with movement and encouraging words.


The children cheered as they pushed the huge gate shut and secured it. Chief pranced back and forth shaking his head, and I think he was even smiling.


We got the shovels and when we were back in the car I ask Susan, “Have you read the book by Monty Robert’s that all the Amish men are talking about?”


“Not yet,” she answered. “My dad has worked with Amish and English horse people. He believes in positive training and that is what he has taught us. He says it also works on us,” she said as she turned to look at me and smile.


When we arrived back at my place, Brad had the yard tractor out and had several holes started. The three children each grabbed a shovel and started to work. As we worked, we told Brad of our herding Chief adventure. I could see that he was impressed.


He was also impressed by the way the children worked diligently all day, each assisting and being assisted, as a team. All in all, we had a fun work day. Brad met my Amish friend’s children, we finished the yard work, and Chief was safely returned to his pasture. 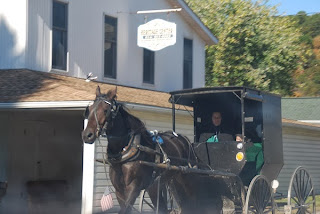