What was it like growing up among the Amish?

My dad was the town doctor in a small town in northern Indiana, and the town had a hitching rail for the Amish to tie their horses on a side street right around the corner from his office. I remember going on house calls with him, sometimes to Amish homes, but of course as a kid, I never realized how special that was. Those are some of my favorite memories.

I worked for an Amish craftsman when I was in high school, after school and summers.  One summer - I was probably a junior in high school - we were working on a room addition for another Amish family, and their five year old son came sauntering up with a very broad grin, announcing to anyone in earshot, “Here comes trouble!”  We just cracked up.

I believe you’re Mennonite. Where your grandparents Amish or Old Order Mennonite?

I was raised in a Mennonite family, yes, but Mennonites have a wide variety of beliefs and practices.  We were part of the most liberal group, and I remember my dad always bought a new Ford from the local dealership every year.  He was also a gadget nut, and bought one of the first color televisions in town, then forbade us from watching anything but sports on it!  My maternal grandfather was born into an Amish family, but left that faith and joined a Mennonite church.  I used to love to hear his stories about barn raisings.  As long as we kids were willing to turn the homemade ice cream handle, he was willing to tell stories.  He was an antique dealer, and provided well for his family selling antiques, even during the Depression.

What is the one big misconception people have about the Amish?

Boy, this is a tough question because there are so many misconceptions. I suppose the biggest misconception is that all Amish are the same, in terms of beliefs and practices. Partly because they eschew modern means of communication and still travel by horse and buggy, it is virtually impossible for them to have a central religious committee. So the interpretation of the Bible and Christianity is up to the local Elders, usually Bishops. That is why you will see things in one community, like cell phones, that another community will ban.  My wife Ginny and I were in Ohio one time, and saw an Amish man drive up to a filling station, grab two five gallon gas cans from the back of the buggy, fill them up and then head out. Ginny was aghast until I explained that no doubt their particular community had approved the use of gasoline for lawn mowers, etc. The Amish craftsman I worked for had some of the latest power tools, but the Elders in his community said they had to be powered by generators, not public utilities, unless we were working at an English home, then we could use their power outlets.

You have a new Amish series coming out soon. What inspired you to write Amish Forever?

I had been toying with writing a sequel to Amish Snow for some time, and when Trestle Press inquired whether I would be interested in writing a serialized Amish romance, it seemed like a perfect opportunity. I’ve always heard there are only seven plots in fiction writing, and they’ve been used since the beginning of storytelling, so the only thing we writers can hope to contribute are a fresh way of telling and, of course, characters that come alive. It’s hard to describe how gratifying it is to hear from readers that they couldn’t put the story and characters out of their minds after they finished reading.

Can you tell us a little about the book without giving too much away?

The Amish really are “strangers in a strange land,” meaning there is always this tension between their way of life and the “English,” what they call the rest of us. This becomes especially important when it involves marriage and family. Ava Troyer, the seventeen year old protagonist, is a beautiful young Amish girl, and is rescued from a bad, Sunday morning wreck by a mysterious young man in military fatigues that speaks Pennsylvania Dutch and then disappears from the scene. Ava is smitten, to the consternation of her family, but she can’t put him out of her mind. Crystal Linn, my co-author, came up with the title, Amish Forever.

Thank you for sharing with us on Amish Crossings. More information about Roger Rheinheimer can be found at  http://rogerrheinheimer.com/ 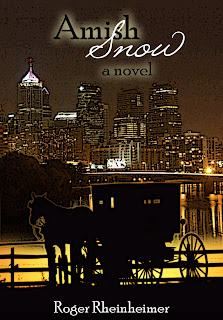