My Amish friend, Smiley, and his secret to loss and tragedy

I was in quite a slump all weekend. My daughter has fibromyalgia and though grown and married, I still can’t stand to see her go through a flare-up. I cry, even inwardly shake my fist at God. Why? Why so much suffering in one person’s life.


So I go through the regular routine of thinking of people who are having a harder time. I thought of my friend with Parkinson’s, another with MS…no relief. Then I thought of loved ones who are struggling with organ transplants, to no avail. No relief. I am a mom hurting because of her daughter's pain.


I was digging quite a cavern of self-pity and anger so deep, I just felt like staying in bed and reading all day today. Believing God always goes before me, making my path straight or more bearable, I thought of what transpired over last week, and I thought of Smiley.


Smiley is an Amish man in his mid-thirties who should be cast in The Lord of the Rings as a very merry hobbit. He has a permanent smile etched in his face and laugh-lines around his eyes. What’s so inspirational about Smiley is that years ago, he and his wife survived a tragic house fire…some of his children did not.  I’m sure he grieved, but now he has a secret glint in his eyes, as if to say, “I know something you don’t. I’ve been through the refiner’s fire, and came out as pure gold.”


When I first met this awesome young man, I asked his why he was called Smiley. He just said he smiled a lot, he supposed. He was working on putting a new roof on our house, and another Amish fellow pulled me aside and told me his tragic story. As usual, I have 1001 questions, so I asked how he could still be so merry. Didn't he grieve? Don't the Amish believe in crying? etc. etc. etc. “We move forward, jah?” Ray said. I stood there, dumbfounded.
When taking Smiley home later that day, I told him I was so sorry to hear of his loss. Thinking he wouldn’t want to talk about it, he surprised me and opened up. He said that he sorely missed his "first family" but God has given him another one, and he moves on in life.


I saw Smiley last Friday at a fishing hole with three young sons, laughing and having a good time. He has moved on, and today, I will too.  My problems are so petty compared to his lose, but the lesson is the same. Keep looking forward, and instead of shaking the fist at God, open it and take His hand. 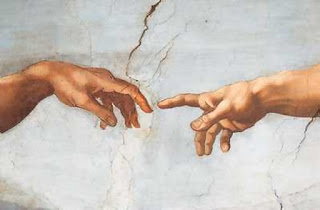 Posted by Karen Anna Vogel at 8:43 AM