How do the Amish shop? Thrifty tips to stretch your dollars

Before I knew any Amish folks, I had an advantage to thrifty shopping, since my mom and dad were both first-generation Italian/Croatian, respectively. When you see through the eyes of a foreigner, so to speak, you see the materialism and entitlement mentality that many Americans have. As my Italian grandma used to say if I wanted something big, “Hey Kad, you think you something-a special, uh?”


When I had four kids under the age of seven living in rural Upstate New York, I met many Amish, and became close with Harry and Katie Hershberger. He had a variety store attached to his house, being wheelchair bound, and we shopped there regularly. What struck me right off the bat was there was no pressure whatsoever from Harry to buy something. This is so simple, but hard to live by. We’re always bombarded with advertisements, but the Amish pay in cash, and know a penny only goes so far.


One day, after picking Katie’s brain for cost effective recipes, she mentioned their food co-op. It was an “Amish only” closed bulk store. Instead of showing a card to get in, I was to say, “Harry and Katie sent me.” I’ll never forget our first visit. I had all four kids in tow, and we walked into the store behind an Amish house, and all eyes landed on me, full of suspicion. “Harry and Katie sent me,” I quickly said, and with relaxed faces and smiles, they welcomed us in. You see, a co-op is a lot of work for a few people, to benefit the Amish community. I didn’t contribute to their communal way of living and was about to reap its benefits, but that’s how much a real friendship with an Amish family is valued. I learned later we were called “Trusted English Friends.”


Back to shopping. My jaw dropped when I saw all the prices in this co-op. C-H-E-A-P. The Amish don’t believe in price gouging, but helping each other save. The women in the store give out recipes: cost saving recipes. The Amish collect these recipes, and try other ways of making it better with less money, as if it were an art form. My favorite to this day is making granola. The Amish put in everything edible but the kitchen hand pump, mix in gooey brown sugar syrup, and consume it. “The kids don’t know there’s stale cereal in there,” they’d say. Well, I tried it, and it works. J


So, the Amish work hard to help each other save money, and we can do the same. When I see an item majorly on sale, I text people in my “co-op” and ask if they need any. When I go up to Smicksburg to Lydia dry good store, I contact my “co-op” and buy for them. They do the same, when they see a sale.


I can’t really write this little article if I didn’t bring in the Amish love of Wal-Mart. If you ever want to see Amish people, go to a rural Wal-Mart! It’s so fun to watch them. They don’t go often, maybe once a month, but do they ever stock-up. There’s a bus from Smicksburg, PA to Indiana, PA, fifteen miles away, just to take the Amish to Wal-Mart once a month. I was at Lydia’s after one of her Wal-Mart sprees, and she and her husband were lit up and very animated. “Do you know how cheap it is to get walnuts at Wal-Mart?” they asked with glee, skipping around the kitchen, putting their groceries away. I had to hold back the laughter. The Amish really think it’s fun to save money.


Fun to save? Why? Like I said, when you pay cash for everything, you know there’s a limit, right? So, it’s almost like a game to them as to how much they can get with their dollars. I think there’s a real joy in a goal that’s met, too.


One thing that may shock you is that the Amish also attend garage sales, flea markets, second-hand stores and auctions. I saw a group of Amish women at my local Salvation Army. Of course, they weren’t buying clothes, but books to devour or household items, such as dishes, pots and pans etc. Many people wouldn’t be caught dead in a Goodwill of Salvation Army, but not me. I learned early in life from my Italian grandma, “I’m not something-a too special.” And since we pay cash now, too, I get really excited to see how I can stretch a dollar. 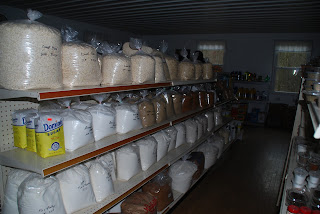