Quakers, an inspirational pious group similar to the Amish

I wrote an historical fiction book about Quaker abolitionists set in 1850. I tried to find out how the Amish helped runaway slaves in Pennsylvania, but found very little information. But what I found out about Quakers, a very similar group, really is astonishing.


The first stop is at Oakdale, a house still standing in Chadds Ford, Pennsylvania. Isaac and Dinah Mendenhall built it in 1840 to include a hiding place for runaway slaves. This room was behind a fake fireplace and never discovered. They were the first stop on the Underground Railroad as runaways crossed the Delaware River.


The next safe house, eighteen miles north, is John Vickers pottery shop in Lionville. He hid fugitive slaves in his kiln and under pottery when bounty hunters searched his place. Many times he hid slaves in a wagon covered with pottery on their way to the next stop, to Kimberton where the Lewis sisters lived.


Grace Anna Lewis and her two sisters hid slaves long-term in Kimberton. Many where hurt, like the true story of Johnson, a runaway slave who saw his former master on a train and jumped off, favoring death than being caught and taken back into slavery. He was nursed for four months by the Lewis sisters, and then Quaker Friends raised money for his passage to Haiti.


Also in the story are two ex-slaves and active in Chester County abolitionism, Harriet Tubman and Sojourner Truth. Sojourner wrote her autobiography in 1850, the year the Fugitive Slave Law was enacted. This law made it illegal to hide or even give a meal to a runaway north of the Mason-Dixon Line. Quaker abolitionists were considered criminals by law, with the fine of 6 months in prison and a 28,000 dollar fine in today’s dollars. Harriet and Sojourner’s life stories inspired Chester County abolitionists to keep up their good work.


Every era has their poets, too, and John Greenleaf Whittier wrote endlessly not only poetry but for abolitionist newspapers. His life story is intertwined into the plot and an anti-slavery poem, The Evil Days, helps his cousin decide which side he was on: pro-slavery or the abolitionist.


Christmas Union seemed to write itself, based on a chain of real life facts, and  I hope to write more about Quakers in the future since their heroism and call to social justice is very admirable. They spur me on to write according to my life verse: Speak up for those who cannot speak for themselves, for the rights of all who are destitute. (Proverbs 31:8) I hear from women about multiple needs who are being set free from guilt, loneliness, depression, etc. and those chains are just as real as the ones slaves wore during the 1850’s. 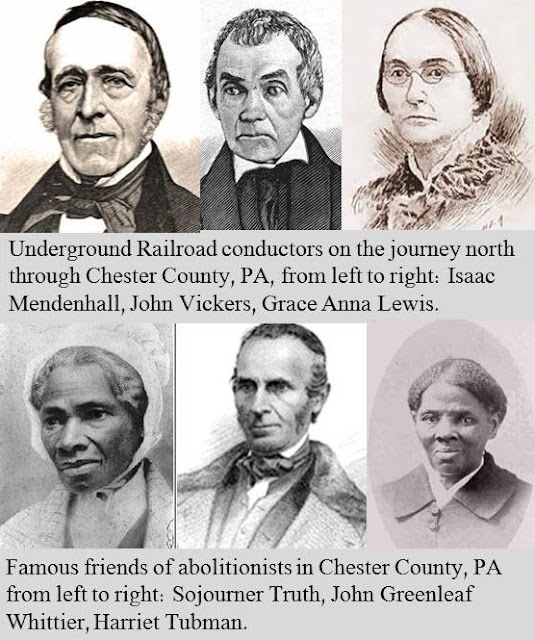