We bought our century old farmhouse fifteen years ago, and with the help of the Amish, the exterior got a facelift. I don't have all the pictures, as the Amish didn't want many taken, but the ones they allowed me to take tell a story.
﻿﻿  First the team of four had to take off the ugly tan siding and front porch. The porch was very large and I wanted more of a cottage-style look. Wanted something Jane Austen would feel at home in, and my daughter and friends who like to watch Pride & Prejudice or Emma over and over again... 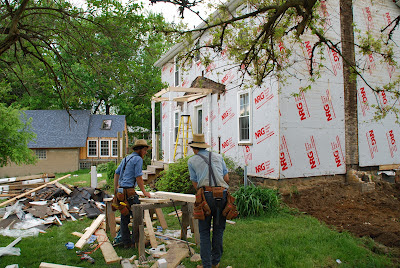 So, Noah, on the left, came up with a plan. He said he always admired those "little peaked porches" the English were allowed to have. I wasn't sure if it would look right, but he assured me it would. So here he is with brother-in-law, Joe, framing my "Pemberly" porch, all the while biting my nails that it's not going to look right. But Noah told me he could "see it" already. Glad he did...... 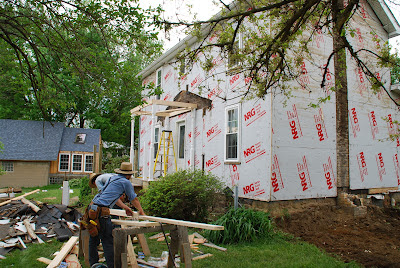 Here's Noah deep in thought...not sure if we're doing the right thing......nails almost gone. In the background is a small greenhouse they built a few years ago, that's attached to our two car garage. 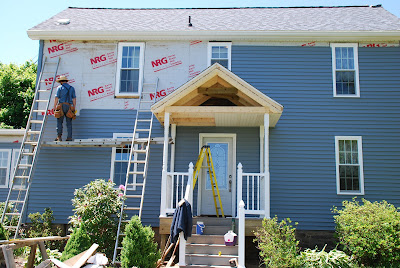 Believe it or not, Noah and I went to Lowes and he picked "fancy" railings for the porch. Again, I'm thinking we made a mistake, until her put them up. So, I had him look at the door I picked before purchasing. "Not fancy enough," he said. "Go for the etched glass." I thought it wouldn't match, wanting a cottage door, but a real cottage door started at $2,000.00...I settled for the one in stock Noah assured me would look as good...(only $450.00) 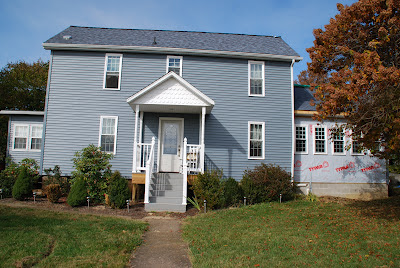 Okay, we're making some progress. They built an addition on the side. Now I planned on a tiny one to match the little sunroom off to the left. Noah scratched his head and said, "Why would you do that for? Why not have a big addition? Doesn't cost that much more." He was right....but I wasn't sure if it would look right. I like small houses, and was confused. Well, hubby wanted a bigger addition with a fireplace. The Amish built this 15x25 addition at a quarter the cost a contracter would have charged. It took all summer, as we built it as we had the cash (Dave Ramsey freaks). Instead of  being put off  by this, the Amish pat us on the back for our frugality. 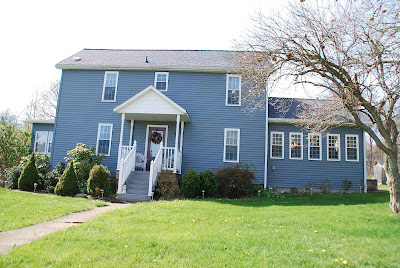 The house today. Noah moved to New York for cheaper land. He sold us his 15 acres for what he paid for it, since he could never make profit off of a friend. Actually, he sold it cheaper to us than another Amish family. It took two years to complete "This Old House" but I miss hearing the Amish singing in German outside. They also came to work with a "joke for the day". Need to build something else. ;) 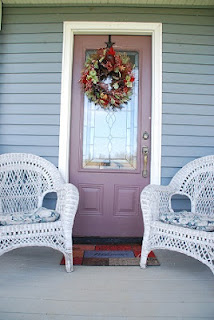 The porch Noah could visually see even before it was built. He confided in me that he wished he could have gone to college to be an architect, but being Amish was more important to him. 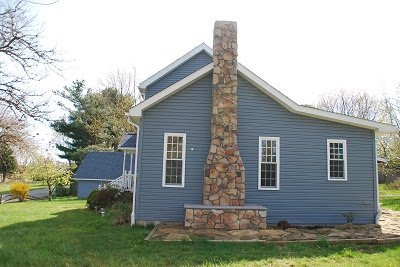 I think Noah and Joe had the most fun putting up the chimney. 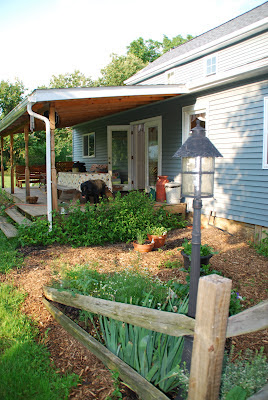 They put a new porch on the back of the house. We've had many wunderbar gut talks with the Amish, because before we remodeled the outside of our house, they built us a barn..... 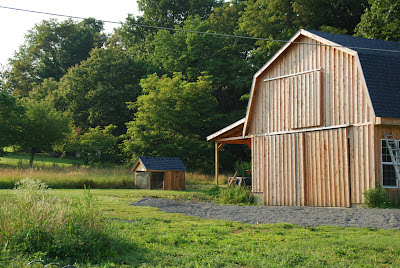