Do Knitting Circles who knit for the homeless make a difference? Kathi Macias stops by to talk about her new novel, Unexpected Christmas Hero.

As we enter into the holiday season, I have a treat for readers of my blog. Heartfelt Christmas memories from people who grew up Amish, like Jerry Eicher and Maryann Kinsinger. Amish authors will be on, sharing with us all they’ve gleaned to have a simpler Christmas. I’ll also share about what the Vogel’s have learned about simplicity, sharing cost cutting Christmas presents, and being involved in charity work.
Today I have on Amish Crossings a very special friend, Kathi Macias. She writes about social issues to bring public awareness. Her books in The Freedom Series deal with human trafficking, so I wasn’t surprised that Kathi’s Christmas book hit a real nerve with me, too. Unexpected Christmas Hero intertwines the lives of a homeless single mother of two young children and a Vietnam Veteran. They keep passing by each other at shelters and church.


In my books, Amish Friends Knitting Circle, the women knit for the homeless in the USA. I knew knitting circles did this, but after reading Kathi’s book, I wondered if it really made a difference. So, to kick off the real reason for the Christmas Season, I thought of how we could give a gift to Jesus. And it’s in giving to others that we give to Him.
I tell you the truth, when you did it to one of the least of these my brothers and sisters, you were doing it to me! Matthew 25:40.


So, what can we learn about giving to the homeless from Kathi Macias? Let’s jump right into the interview.
Kathi, what prompted you to write Unexpected Christmas Hero?


I've been involved in homeless ministry off and on for many years, but it wasn't until someone in our family who had actually experienced it for a while challenged me to write about it that the story began to form. The more I began to research and write, the more involved I became. These people became real to me, as readers everywhere say happens to them as well.
Is this book based on facts, like so many of your other books on social justice?


Loosely, yes. Many of the homeless are families with young children and also vets, so it was natural for me to weave the two together in this story.
Granny Weaver in my book, Amish Knitting Circle Series, knits for the homeless along with her circle. Knitting circles are springing up across America to do the same. What would you say to women who are knitting for charity? Is the need that great?


Yes, the need is so great! We can't begin to do enough, but we MUST do all we can. Each knitted cap or shawl or blanket can mean the difference of a homeless person surviving a frigid night. Every meal served is a gift from God to one of His beloved children. That He allows us to participate in delivering those gifts is such a great blessing!
The Vietnam Veteran and the young mother of two children are portrayed in your book as if real people. Are they real people, making it a faction book (half fiction, half fiction)


They're not real people, as far as I know, but modeled after many like them. However, after the book was finished and in production, when the publisher sent the photographer out to find someone to pose as Rick (the homeless vet) for the book cover, he saw a man that looked so much like Rick that he was stunned. He approached the man and asked if he would consider posing for the cover, explaining to him what the book was about. The man, whose name is Willard Parker, readily agreed, sharing with the photographer his own amazing story. It seems Willard really is homeless and has been for quite some time. Over the years, while living on the streets, he became a Christian, but he also lost touch with his family. He is hoping and praying that having his picture on the cover will somehow enable him to reconnect with them, particularly his grown daughter. We are doing everything possible to make that happen, including posting his story on my Easy Writer blog http://kathimacias.com/help-reunite-a-family and on social networks everywhere, talking about it on the radio, etc., so anything you and your readers can do to help would be very much appreciated.
What scriptures came alive to you as your research homelessness in America?


I thought of His feeding of the multitudes. Sometimes the need seems so overwhelming that we are tempted to give in to despair, but I believe that so long as we respond in obedience to the Savior's call to minister to others in His Name, He will provide what we need to do so.
Besides knitting for the homeless, what is their greatest need?


Obviously shelter against the elements and food are at the top of the list. But one of the things that most helps them re-establish their lives and get off the streets is to provide a place they can go to shower and change into clean clothes and to prepare/print/update resumes so they can try to get a job. It is nearly impossible to get one without those basic necessities, as well as an address and/or phone number for prospective employers to contact the applicants. This is practical help that not only meets immediate needs but gives them long-term help and hope for a better life. 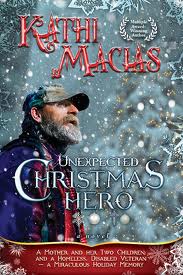 If you’d like to get involved in a homeless shelter near you, or donate, and excellent resource is Feeding America. If you follow this link to a food bank locator, and put your zip code in, it’s shocking how close to home this problem is.


SUCH A WONDERFUL UPDATE TO THIS BLOG. Kathi Macias sent me this message:

Mr. Parker's oldest daughter, Amber, contacted me Wednesday afternoon. Someone showed her the book cover and she is thrilled! Now both grown daughters and their four children (between them) are looking forward to the reunion. We're working on details to make that happen now.

WHAT A HAPPY ENDING FOR ONE HOMELESS MAN! Hope this article inspires you to reach out and help others ;) Karen