Why four Amish men came running at me yelling, “Hey!”

It was in the high nineties here in W. PA yesterday, but Tim and I were on a mission. We bought 15 acres of land off an Amish friend and needed to build another access road. So, we went to several Amish homes to get advice concerning building codes and the cost of building a small barn. I’ll cut out the seven hour visit spree and tell you why I got myself in trouble.


It was just too hot to sit there in an Amish porch and went behind Moses' house and sat in my Jeep with the AC on to cool off. From the driveway which two Amish families share, I couldn’t believe what I saw going on at the neighbors. Fifteen or more Amish children, eight and under, playing tag in the yard, and when hot, putting their little heads under a water pump. One yanked on the pump handle and the children took turns getting refreshed.


So, I sinned. I took my camera, got out of the car and started snapping. I wouldn’t have posted them on Facebook with their faces visible, but blotted them out using Photoshop. Several shots in, that’s when I looked like a kid caught with her hand in the cookie jar. Four Amish men raced out of the house, fear etched on their faces, and I don’t know what they thought? A stranger in the yard trying to take a kid? Well, Levi, thank goodness, yelled to the men, “It’s Tim’s wife,” and they all relaxed and went back inside to a birthday party they were having for Levi's wife.


Levi came over to chat. He was so polite and said no pictures were allowed, but he was so sorry about having to say this. I told him I understood, since they have a different culture, telling him I upset some men in the Dominican Republic by taking up a hammer to help build something. The men thought this was not women’s work and refused to work alongside me. (Strange, but that’s another story)


I think Levi apologized four times in all with a lot of remorse. The Amish are pacifists, turning the cheek and peaceful people. When pesky tourists click the camera in their faces they just turn away but usually don’t yell. I think this is why Levi was apologizing.


Relationships with Amish friends are more important that getting folks to see Amish pictures on my blog or Facebook author page. Levi said stick to pictures of barns, windmills, farms etc. Other Amish say it’s the face that they don’t want shown, but a picture from the back is okay. I’ll stick to those two rules, and go to the Old Order Mennonite settlements springing up near us, who dress like the Amish but allow pictures. I'd never want to jeopardize a relationship with an Amish friend, and it will only get harder because the Amish family living next to our land has nine children and just got a pony! Oh, my, they're too cute when leading it around their house! 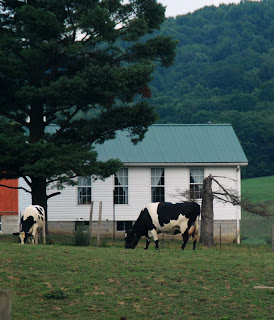 Posted by Karen Anna Vogel at 8:16 AM