“Music is my life,” was my mantra in high school, so starting college as a music major was a no-brainer. When I met my voice teacher, I was so embarrassed for him. He was an extreme stutterer; but when he sang, he was instantly cured. Oh, he was so inspirational. Research suggests there’s a brain overlap with music and speech. Music also has the ability to help dementia patients remember. Music is the last thing to decline in the brain. As a beginning music therapy major, I was floored.

Here’s a snippet of Kimberly Sena Moore Ph. D in Psychology Today’s article Memory through Choir?
“Let’s take choir, for instance. Think about some of the benefits that come from singing in a choir—there’s deep breathing involved (respiratory strength), vocalization (speech production), the need to focus on a given task (sustained attention), the challenge of learning new material (learning and memory), the pleasure derived from performing (emotional benefits, like pride), all within the context of a social group (socialization).”

Pretty impressive, huh? What most don’t realize is that singing is a staple of Amish culture. Singing at home, church, Singings (for youth to meet up) or singing in three-part harmony while working on our barn. It was the most heart-warming look into Amish comradery; I soaked in the beautiful German accapella (no harmonica in tow), closing my eyes and fantasizing once again that I was on the set of Little House on the Prairie.

And then I thought of the joy my kids brought to nursing homes as we tried to be the Von Trapp Family Singers. Patients were wheeled in or used their walkers to get to the lounge room. Tim and I strummed the guitars to slow songs like Kumbaya or Amazing Grace. After a few songs, the audience was so excited, they shouted out, “Play something faster.” So we did and some stood and others clapped their hands. The room was filled with laughter and joy and comradery. To be honest, I didn’t want to expose my kids, then four years old to nine, to the nursing home environment. But after that night, we went back faithfully once a month and my kids learned some valuable lessons from World War II Vets.

A benefit music plays in the Amish church services is the ability to connect with the writers of their hymn book, The Ausbund. The core of it is fifty-one songs written by Anabaptists while imprisoned between 1535 und 1540 because of their convictions. Some didn’t survive and many were martyred. A fresh respect for their ancestors and the courage to keep the faith, solidifies their beliefs. 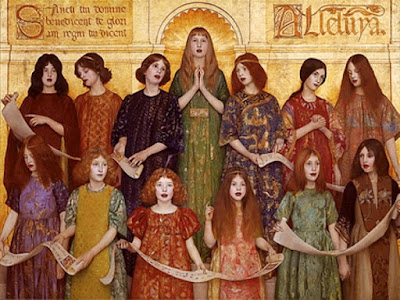