Gelassenheit: Serenity in Quietly Waiting, an Amish Way of Thinking

I treasure this trait among the Amish more than anything. Gelassenheit is putting others first, the Golden Rule seen in technicolor among the Amish. When speaking in a group, all eyes are upon you, taking in every word said, and then you may find the ‘Amish pause’. They take to heart what you’ve said and want to give you their full attentive answer.

For example, I asked a man named Levi about what he thought of Old Order Amish verses New Order Amish. He bowed his head, pulled at his beard and said nothing. I thought I’d pushed it this time, asking too many questions or touched a nerve. After a ‘spell’, Levi kindly looked up and said, “I think an older Amish person can explain it better. They’re wiser than I am.”
I almost fainted. Here he was, in his prime at thirty-some years old and he’s saying he doesn’t know it all, that the older the wiser and he meant it.

Gelassenheit is seen in their culture through their personality, yet they have nicknames like ‘Tall Laughing Jonah’. Some are hilarious to talk to, but there’s still that deep down seriousness that comes with being an attentive listener. And if you say something you shouldn’t, they usually just smile, overlooking quickly any hurt or irritation. Talking to Barb, mother of nine, I blurted out, “Oh my goodness you put up the hard way. Have you heard of a vacuum sealer?” Silence and then a smirk from Barb. Her daughters were there and I may have enticed them to dream of greener pastures. Without having to be told to stop tempting her daughters with modern gadgets needing electricity, I got the message. I simply said, “But to each their own, I suppose. Many can with a pressure cooker and love it.”

Gelassenheit in German means ‘serenity’. In the Amish Froschauer (German) Bible they take this virtue from Lamentations 3:26 and it means ‘quietly wait’. So, when I flubbed up in front of Barb’s daughters, she was quietly waiting for me to get the cue to say the right thing: don’t tempt my daughters to go the English route.

Gelassenheit is part of the Amish Ordnung, which is German for order. This serenity or quietly waiting is shown in their simplicity of clothing, house style and having things in common. No competition to keep up with the Schmuckers.

This is not to say that they’ve lost their identity, as so many are known for their unique talents, but their hope is that it all points to their simple lifestyle. By putting others first, Amish businesses don’t believe in ‘extortion’. They say that right out loud. “Why should we charge you too much if we’re happy with our profit.” Again, you just want to hold on to a chair, shocked.

My good friend, Maryann, had to get her entire kitchen replaced due to flooding. She shopped around and was discouraged. Since we go to Smicksburg often, we thought of Amish cabinet and furniture makers. and you they don’t cut corners. (No pun intended) They use real hardwoods and are upfront about costs. They have a yearlong waiting list because Maryann got a custom-made kitchen with over twenty cabinets plus an island as big as a dining room table, installed, for $12,000.00. Let me spell that out if you missed it: twelve-thousand dollars. And her cabinets are cherry!

So how can we embrace this ‘serenity’? For me it’s jumping out of our performance based culture. What you achieve isn’t more important than who you are. Having the biggest house on the block doesn’t mean it’s the happiest one. Finding joy in serving others is what’s important. An Amish proverb, painted on a simple little board, lives on my kitchen window sill. “The most important things are not things.” It brings serenity to my soul every time I wash dishes. 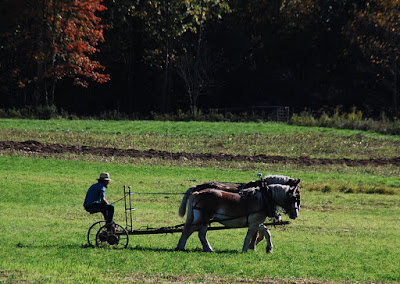 The slower pace of Amish life lends to 'quietly waiting'.
Posted by Karen Anna Vogel at 11:06 AM